"The problem with expanding this is that you know with the advent of PTSD, which I think is a new phenomenon as a product of the Iraq War" - Senator Dianne Feinstein

WHAT?! WHAT?! How can any human being on the face of the earth, above the age of 8, possibly believe PTSD is something new? Please tell me that quote from Senator Feinstein is made up.


It's not. See the video here

This is not something limited to combat veterans; who Senator Feinstein has mistakenly insulted every one before the Iraq War and I don't mean just U.S. Troops. Every man, woman and child that has gone to war she has unintentionally disrespected by that ridiculous comment.

Beside soldiers; countless police, firefighters, paramedics and first responders have dealt with PTSD from their chosen professions. Also victims of physical and sexual abuse have suffered crippling effects from PTSD, along with many others from all walks of life.

The term PTSD may be something Senator Feinstein never heard of before the Iraq War, but it's been around.

A friend forward the attached video to me, because of my views on gun control and the 2nd Amendment. But this goes far, far beyond that. This has me all worked up, and it is not a 2nd Amendment issue. It's not about a Democrat vs.Republican issue, or a Conservative vs. Liberal thing either.

What bothers me is this. Congress has about a 20% approval rating. Every election, we end up sending about 80% of the same people back to Congress, expecting things to get better. Even when we send someone "new", it's usually someone from the same old guard.

For a perfect example of that, one needs to look no farther than my state of Wisconsin. Last year one of my Senators, Herbert Kohl retired after holding office for 24 years. He was replaced by Tammy Baldwin, who had been representing Wisconsin's 2nd District in the House of Representatives for the last 14 years. Both are from the same political party. Along with Senator Kohl's predecessor, William Proxmire, who was Senator for 32 years.

(Side Note: for more on how I feel about that, please see my earlier post "Can We Recall The Candidates")

Even if Senator Baldwin becomes a one term Senator, by being defeated by a candidate from another party; that one Wisconsin Senator's seat will be held by someone from the party for 62 consecutive years!

From every state of the Union, our U.S. Congress is made up of, more or less, the same people. Same people, same ideas holding the same office for decades at a time. Ideas like PTSD, being "a new phenomenon as a product of the Iraq War."

I really don't care what Senator Feinstein's political views are. It wouldn't matter to me if she was as liberal as humanly possible, a smack dab middle of the road moderate, or a right wing extremist. If she thinks PTSD is something new, she shouldn't serve on a neighborhood zoning committee, let a lone the U.S. Senate.

But she does, and she will.

Regardless how her gun control bill goes, regardless how she votes on anything or what she says before the TV cameras; this woman will be re-elected until she dies, or wishes to give up her enormous amount of political power to a younger version of herself.

I'm a big fan of the twelve year term limit idea. But maybe one term is more than enough.

I will say it right here, right now. If in 2016 I find myself at the township polling booth trying to decide between another Bush and Clinton, any remaining hope I have for the survival of mankind as we know it WELL BE FOREVER GONE!

Jeb & Hillary, we have had 20 years of Bush and Clinton administrations. Thank you, that's enough.
Posted by Shane Lien at 3/04/2013 No comments:


Since I'm not a great writer, I thought it might be easier sometimes to create a quick video blog or vlog from time to time. I'm not a good public speaker, so they're not going to be very good either.

I tried for about 2 weeks to make the perfect video, but just got frustrated with the whole process. I decided to just do simple, one take videos and accept they won't be perfect.

Here is a link to my YouTube channel intro video

I have to warn you, it's pretty bad. But with a little practice over time they may become bearable to watch. You have to start somewhere, right?

I will post vlogs, product reviews and some general videos on things I find interesting.

The End, The Beginning, a Ton of Determination, and Class

I had a long internal debate on whether to post this or not for a few weeks now. There was a similar picture on Facebook, and after seeing it, I posted this one for about 5 minutes. I took it down because it just seemed too personal, too bittersweet. It was (and still is) a weird thing. I want everybody and nobody to see this picture at the same time. An article about this has been published in the local paper, so I decided to go ahead with it.

The picture is of my cousin and uncle hugging each other after her very last high school hockey game. The Cousin's team won it's first play off game in it's young history. A few weeks ago they played their first ever 2nd round playoff game in River Falls, a town about an hour and a half south from ours.

The Uncle isn't in the best of health now. Even though his two daughters and hockey are the biggest things in his life, he was strongly advised not to go to the game. A game that could (and turned out to be) his youngest daughter's very last game for a team he was instrumental on starting. A daughter that he taught how to skate, who he helped coach her whole life. 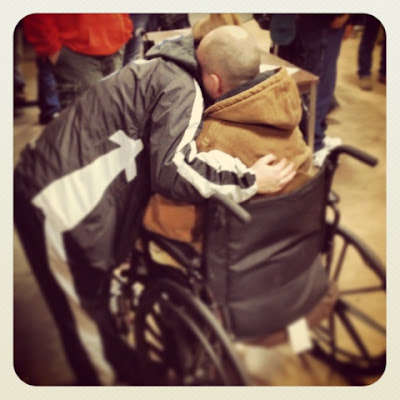 As the above picture shows, he wouldn't listen. He went to the game.

The Cousin has a tremendous amount of determination and love for the game of hockey and there is no question where it comes from. I am beyond proud to be related to these two, and having them be a major part of my life.

The final game of the Cousin's high school hockey career ended in a 3-1 loss. The game was a clean, hard fought battle between to pretty evenly matched teams. The score could have easily been 3-1 in the losing teams favor. I said that honestly, not just because I'm a fan of the loosing team.

The lose and sudden end to season was a bitter pill for the young women of the local team. It was quite a year with some sudden shake ups in the coaching staff, an impressive 12 game winning streak, finishing off with a 2nd round play off game.

Of course, the end was most difficult for the Seniors. Some of them played together since they were five or six years old. While a few will continue to play Division Three level college, many will never play on an organized team again.

Some of the parents were beside themselves too. From all the time spent together at practices and games, making travel arrangements, team sleepovers and putting in volunteer hours at the rinks; a lot of the other girls on the team have become part of their extended families.

After the game players, coaches, parents and fans sort of mulled around the commons area of the rink much longer than normal. We all were faced with the cold truth that it was the end. End of the season. For some the end of a chapter of their life. The last time to lace up the skates and strap on the helmet. The last time to cheer on the daughter, sister, cousin, or friend. The last time to yell (jokingly) "HIT THE NET, LIEN!" or Johnson, or O'Brien when they missed a shot on goal. A game tradition carried on by three fans, also named Lien, Johnson, and O'Brien.

While the team and fans where dragging their feet, not wanting this final moment to end, I became aware of one of the classiest things I've seen. With his involvement in the league, my uncle is known to the River Falls team. They are also well aware of his condition and the shear amount of effort and determination it took for him to simply attend his youngest daughter's game. Quietly and respectfully without any fanfare, they gave him the game puck.

Even though next year the Cousin will be off playing for a college team, I will most likely still catch a few home games of the local team and cheer them on. I will also keep an eye on the stats, scores and standings on the league's website with interest on another team. I'm now also forever a fan of a team from a town south of the home team too.
Posted by Shane Lien at 3/03/2013 No comments: