One Positive Thing About The Westboro Church 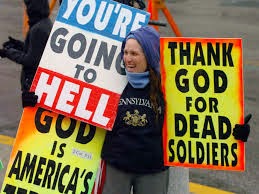 So the guy (I can't and won't call him a pastor) who lead the Westboro Baptist Church died. The only reason we know of him is because his church shows up at funerals for the fallen troops and famous people to protest against gays. They're not having a funeral for him. Weird.......

That to me is pretty sad. No I don't really care if they have a funeral for the guy. It just show (as if we needed more evidence) of how pathetic these people who claim to be a Christian church are.

When I think of a Christian church being active for the greater good in the name of God, I think of things like food shelves, soup kitchens and orphanages. I think of potlucks, bingo, spaghetti suppers to raise money for a local family that lost their home to a fire or for building a hospital on the other side of the word.

But with the Westboro crowd, there thing is protesting funerals with provocative signs showing how much they hate gay people. Doesn't seem to be the best choice of causes for a church, but that's their thing. It's pretty sad that they untied, organized, and put a ton of effort and resources into trying to anger people.

The saddest, most pathetic aspect of them, to me anyway, is that they do it in such of a cowardly way. If they are so outraged about gays, then they should take there protests to the source of their outrage. Instead for protesting funerals of dead soldiers, why don't they line up at every gay pride parade, or at concerts, movie premieres or sporting events of gay artists, performers and athletes?

The answer is obvious and simple. Most people have enough respect for the fallen and the family not to escalate the situation at a funeral, but the Westboro protesters would get the shit kicked out of them if they pick another venue. And in my opinion, rightfully so.

But there is one positive thing about The Westboro Church:
They're a collection of hateful people who are not influencing other churches from the inside. If we are stuck with a bunch of delusional haters, they might as well be kept together.