When he's not on the production floor, one of the Sample Techs pretty much always has a Mountain Dew in his hand. He worked into his lunch to get some extra parts molded for me, so I could send them off for testing before this afternoon.

When he placed the parts on my desk, I handed him an ice cold Mountain Dew as a thank you.
It is a small gesture that only cost me $1.25. But it showed my true appreciation of his effort and will bolster our working relationship. Well worth a buck & a quarter.

Little things like that can change the dynamics of your professional & personal lives. A simple smile, holding the door, and a sincere "thank you" are easy to do.

Just reminder; insincerity can be spotted a mile away. If you do things like this solely for the gain, it will backfire on you big time.

Simple little things add up, and they can add up quickly. If your small gestures of kindness and appreciation are genuine and sincere everybody evolved gains.  If your a fake it has the potential to take away any credibility you may have.
Posted by Shane Lien at 1/31/2015 No comments:

The more things change, the more they stay the same

As usual, I skipped last night's State of the Union address. I could never stand them. Even as a young kid I was irradiated by the fact that they had to interrupt prime time TV on every single station tell show a political pep talk that is mostly smoke and mirror with a side of empty promises and half baked facts.

From what I've heard today I didn't miss a thing, as I expected. One of the key points coworkers, friends and talk radio people laughed the most at was the President's empty promise of free two year education. We all know that it will not happen, including the President. We all know it was never intended to happen.

While sounds good to the gullible, naive and hopeful; it is not possible since nothing is really free. In order for it to happen our broke government would need to divert already borrowed funds from another social program or raise taxes. Either way, the American Taxpayer will get stuck with the bill.

In fact, some of the discussions made me think of some of the awesome quotes from (in my opinion) the best political commentator of all time, Will Rogers. The most appropriate being:

"Instead of giving money to found colleges to promote learning, why don't they pass a constitutional amendment prohibiting anybody from learning anything? If it works as good as the Prohibition one did, why, in five years we would have the smartest race of people on earth."


I spent a little time reading and laughing at some of Will Rogers' zingers on Brain Quotes and a few other places. The only sad part about reading what Will Rogers said about our government and two major political parties, is that they sound like he could have said them today, not 80 years ago.

The more things change, the more they stay the same.
Posted by Shane Lien at 1/21/2015 No comments:

Russian Capitalism: AK made in the USA

It's been a little tough to focus on the day job when my phone is constantly going wild with news from SHOT Show 2015. A few friends, bunch of companies, YouTubers, and bloggers I follow are posting, texting and tweeting a ton of cool things that this lover of all things firearms finds more interesting than the tasks at hand.

The news that has gotten most of my interest isn't a new gun or the next must have accessory. It is some news posted on the AK Operators Union, Local 47-74's Facebook page. Kalashnikov Concern is in the process of starting production in the USA.

While I may not be the biggest AK fan in the world, and there is a very good chance I'll never buy an AK from Kalashnikov Concern; I am jumping for joy that they are going to start producing their product in the USA. I think it is fantastic that the Russian company has found away around  the import ban via Executive Order that was put in place in 2014.

If the our President truly wanted to pressure the Russian government with import restrictions, wouldn't he make much more of an impact by banning the import of vodka or other more widely imported Russian goods?

The ban on import of Russian made firearms from Kalashnikov Concern was a well thought out move that made a statement to the Russians without too much risk to the White House for retaliatory sanctions that could escalate things quickly out of control. And with a stroke of a pen the President was able to ban at least the import of some of the style of firearms that many of his political party tried desperately to ban a few years ago.

But now with Kalashnikov Concern setting up shop on US soil, this all changes. The Russian company will be able to sell it's product to it's US market, while providing jobs to Americans. Pretty interesting that the US is getting a lesson in Capitalism from Russia.

If you are into AK's and haven't seen the AK Operators Union, Local 47-74 YouTube Channel yet, you should check them out. Besides having one of the most creative names out there for a gun channel, the have some very good videos to watch.
Posted by Shane Lien at 1/20/2015 No comments: 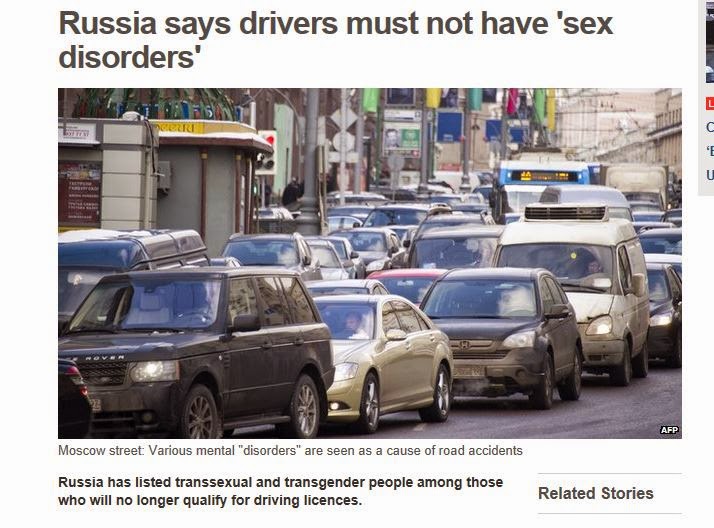 I just saw the above headline on BBC.com. After my initial WTF reaction, my warped humor found the root of the Russian logic: If someone can't stay in a gender role, you can't expect them to stay in a lane of traffic.

I'm rooting against Boehner and I can't even remember the name of the dude challenging him. It's not that I think Boehner is too liberal or too conservative. It's because I think he's been in the House Speaker position too long.

On the ride home last night, there were reports on my car pool rides radio of threats from "Boehner's people" that any Republican who doesn't vote for him will not be appointed to any high ranking committee positions. Whether that's true or just talk radio talk I don't know. But that is exactly the kind of behavior I'd expect from any career politician from any political party that's been in a position of power for too long.

My solution is simple: for every new Congress, there are new members elected to every position. Each and every leadership role from Speaker of the House to the lowest sub-committee chair will get a new person with zero experience in that role.

That would put an end of a lot of political favors to get bill voted on and other BS that goes on in Washington DC.

We need term limits. Not just in how long we have people in Washington DC and the State Capitols, but limits on what they do in there short stay there.
Posted by Shane Lien at 1/06/2015 No comments:

Losers in the Playoffs: Sometimes losers end up winning and winners end up losing.

I find it a strange thing that a professional sports team can make the playoffs with a losing record. That is something I'd expect from a neutered no score is kept everyone's a winner we don't want to hurt anybody's feelings pampered youth league. But the Carolina Panthers have made the 2014 NFL playoffs with a record of 7-8-1.

Bad enough they allow an NFL game end in a tie, but a team with a losing record made it into the playoffs?

My first reaction was if a NFL division was so that all the teams have a losing record, then the division "winner" shouldn't be allowed into the playoffs because playoffs are for the good teams. There spot should be given to the team with the best record that didn't make the playoffs.

After I calmed down and thought about it, I changed my mind from my emotional reaction; like I often do. In the grand scheme of things; rearranging the NFL playoffs so that only the top teams make it in is really no different than a pampered youth soccer tournament where everyone gets a trophy.

Taking the Panthers' playoff spot away from them and giving it to a more deserving team would be merely an attempt to make life fair. And life is not fair. Sometimes losers end up winning and winners end up losing.

Yes, there are better NFL teams than the Carolina Panthers that are not in the NFL playoffs. Yes Carolina has a 7-8-1 record. But they are the best in their division and some better NFL team were not. That's just how it goes.

Now today the Carolina Panthers take on the Arizona Cardinals and I'm actually going to root for the team with the losing record. Who doesn't like an underdog?
Posted by Shane Lien at 1/03/2015 No comments: