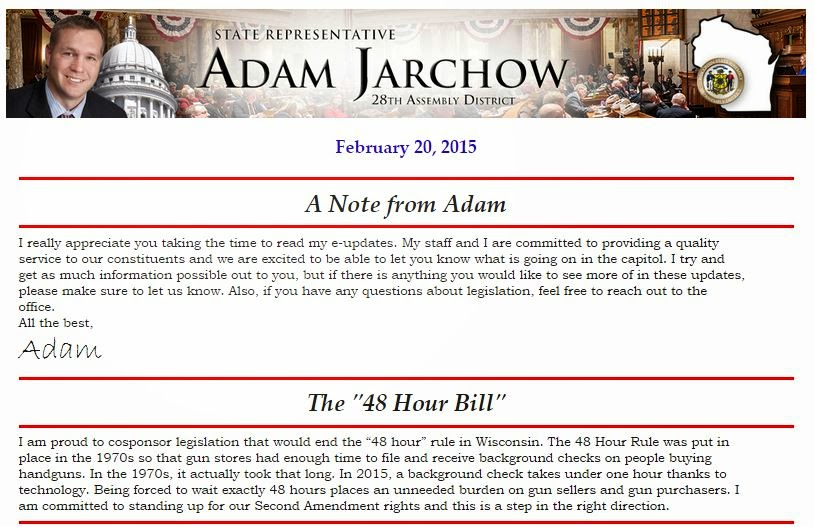 I was very happy to see this email from my State Assembly Representative. There is currently a bill in both houses of the Wisconsin State Congress to repeal the outdated and utterly useless 48 hour waiting period for handgun purchases.

There is simply no logic in a waiting period law. Like Wisconsin in the 1970's some states put them in place to allow time for background checks. But now with nearly instant verification, there is no need.

Sadly some state have put similar laws in place recently with the idiotic notion that it would give someone time to "cool off" before committing a crime. They laws were actually sold on the premise that a person who doesn't own a gun will become enraged enough to kill someone, go to a store, buy a gun with the sole purpose of a predetermined murder. Then while waiting a predetermined amount of time by the State, will calm down and decide not to kill.

Have you ever heard of someone going to a LGS to buy a handgun, purchase it, then call back within two days to say they changed their mind and no longer want the gun? Absolutely stupid reasoning. But then again, people think a "no firearms allow" sticker on a door will stop a determined cold blooded killer when the already existing punishments for murder will not.

At any rate, I'm glad to see my State politicians are working on removing useless laws that infringe upon my rights. It does not make any since that currently I can walk into any place that sells non-NFA rifles or shotguns, lay my money on the counter, complete the required background check paper work and walk out the door with it; but have to come back 48 hours later for a pistol.