So I have this old desk calendar someone gave me at work. Since I use Outlook and Google Calendar extensively, the only use I have for the desk calendar is as a scratch pad. The back of each page is pretty much blank, so it works great for jotting down numbers or a quick note for myself. I try to be as paper-less as much as possible, and being able to reuse things like this help out.

It’s a trivia calendar and the page shown in the photo cracked me up. I remember the Hurricane Katrina benefit concert when Kanye West let the world know that George Bush doesn’t care about black people. In fact, I remember it very well. By chance, I actually saw it happen live on TV.
With no intention of actually watching the concert on TV, I stumbled across it while flipping through the channels. The ONLY reason I stopped, was because I saw Kanye West standing next to Mike Myers. I thought “now that’s an interesting paring, I must watch this.” I made a great decision.
Within seconds of me placing the remote on the coffee table, Kanye said those magical, now infamous words. I truly believe is was his greatest moment in the spotlight. “George Bush doesn’t care about black people.” 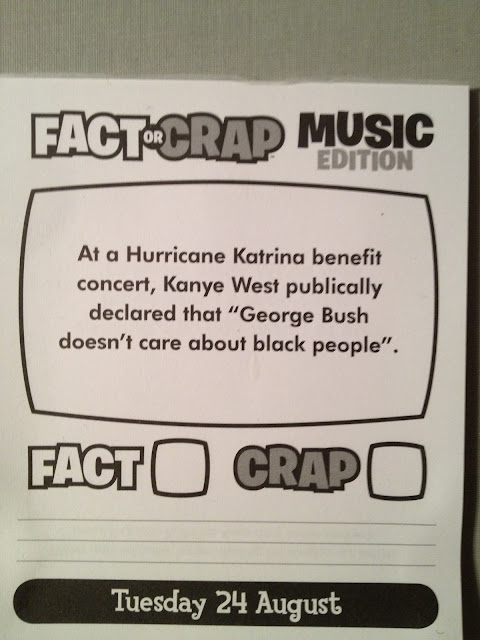 That caught me off guard and I was a little shocked that, out of the blue, someone would say something like that on live TV. Don’t get me wrong, I can see someone saying something like that. People say stuff like that that about all kinds of politicians on your Sunday morning talk shows and the 24 hours news channels all the time. But not during a Red Cross disaster relief fundraiser being televised nationally on live TV. Out of the blue.  With no warning. I was caught off guard and was shocked. but not nearly as shocked a Mike Myers.

I will never forget Mike Myers’ reaction when West uttered that sentence. Now that was must see TV. If there was a hole nearby, that poor man would have crawled into it. He couldn’t believe what was happening. He tried to gain his composure and get the show back on the road, but Kayne West continued, well, continued to be Kayne West.

I laughed so hard at this, I kind of feel bad about laughing so hard. I was almost expecting there to be a wavy fade from that image on the TV to seeing Mike Myers lying in bed, awaking from a bad dream. Like in a Wayne’s World sketch with Dana Carvey at his side.

All these years later, when I think about this I break out in laughter.  But now days the laughter stops pretty quickly. Because I remember that West has breed a Kardashian. There may be no hope for mankind.