Our Problem is Not the President, It's Us. 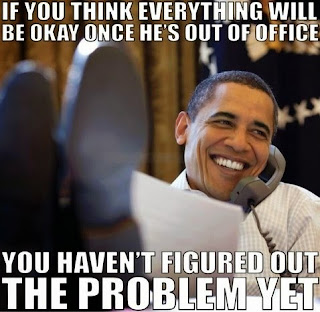 For my lifetime anyway, it seems all blame for the problems of our country fall squarely on the President. While I have not been a fan or really impressed by any President since I've been of voting age, I can blame everything on them. Lots of things yes, but not everything.

I'm also very sure things for this country won't improve in two years regardless of who we elect as our next President.

For starters, the type of people who could fix things are rarely the type of person who will or feasible can run for elected office.

The type of people who run for office are typically, but not always; politically well connected, well off financially, are pros at saying what people want to hear, and are completely narcissistic and run for office primary for the power of the office. I say typically, I'm sure the people in office you like and continually vote for are completely different.

While the President is the lightning rod for our political angst, not much that he does can be done without Congress. You know, that branch of our Federal government that maintains about a 20% approval rating. The stat that 80% of the people don't approve of Congress amazes me for several reasons.

First off, this very low rating isn't a recent spike. Congress has pretty much maintains a below 50% approval rating. People who we picked to go to Washington, DC as a whole do not meet our approval.

Not only do we send duds to DC, we keep sending the same ones back!
Per Congressional Research Service Report RL32648:


"The average years of service for Members of the 110th Congress, as of January
3, 2007, when the Congress convened was 10.0 years for the House and 12.82 years
for the Senate. This is a record for the Senate. House Members who took their seats
at the beginning of the 102nd Congress (1991-1993) represent the high point of
Representatives’ average tenure (10.4 years)."

Why do we do this? Simple, we refuse to accept the fact that we vote for career politicians who only say what we want to hear so they can hold on to their seats of power. Like I said above, I'm sure the people in office you like and continually vote for are completely different. And that's the problem. We refuse to admit we vote for people who should not voted for.

We, the American People fit the often said definition of insanity: doing the same thing over and over again and expecting different results. We complain about career politicians like Boehner, Feinsten, Hatch, McCain, Pelosi, and Reid yet we are the same fools who keep sending them back.

Why do we do this? Two reason I can think of. We vote along party lines regardless of the person representing the party, and the "I hate Congress but love my Congressman" syndrome we all seem to have. "He's been serving my District for 15 terms, he know Washington" is a common excuse to keep sending some one back. Yep, he know Washington, mainly how to keep himself there while having a 20% approval rating.

But you're okay sending your Senators and Representative back to a Congress that has a 20% approval rating. A Congress that is pivotal in running our Country.

Most importantly, we need to pick the candidate we feel is the best. Not who the union endorses, or paper endorses, or who has the most yard signs in your neighborhood, or the political party Grandpa was active in.

Sadly this is something that vast majority of us can not and will not do; and our  20% Congressional approval rating proves it.
Posted by Shane Lien at 9/10/2014