Too Bad She Can't Be Fired. 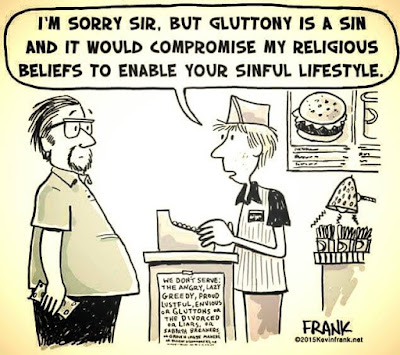 So now the latest chapter in this annoying and unneeded story of marriage equality in America is of some County Clerk who is setting (or at least was yesterday as I type this) in jail for contempt because she refuses to sign marriage licenses for same sex couples.

She was elected to serve the public. If her personal beliefs interfere with her service, she should resign and find something else to do that wouldn't undermine her personal morals. Seems pretty simple to me, but I guess she'd rather try to make a point. The only point she's made to me is that she's a self-centered asshole.

While I respect her willings to stand up for her beliefs, she is doing it all wrong. This is just like the stories we've seen of people getting a job in a deli or a grocery store, then refusing to handle pork products because of their beliefs (or something similar). If your job requires you to do something you're against, you need to work somewhere else.

I really wish we could get past this practice of making a court case out of everything that disagrees with our personal beliefs. If you don't want to give same sex couples a marriage license, don't be a County Clerk whose job requires signing marriage licenses. If your religion forbids you from even touching pork, don't work where touching pork is part of the job. If you work for the Catholic Church and they won't pay for your birth control, buy your own birth control or work for someone who will. If a baker won't bake you a cake for your wedding, give your money to another baker who will.

So this County Clerk sits in jail because she is an elected official who refuses to do what she was elected to do. Too bad she can't be fired. It would save a lot of unneeded drama.

A lot of unneeded drama could be saved if the government simply got out of the marriage business in the first place. Like I suggested here: Solving The World's Problems, One At A Time: Same Sex Marriage