While I've been working behind the scenes preparing to grow this blog, I might have jumped the gun a little. One of my ideas to direct traffic to this blog is to post a YouTube video regarding a current hot topic, disable the comments on the video and provide a link to a post here on the same subject.

A topic has come up that, even though I don't have everything in place here, I really couldn't pass it up. 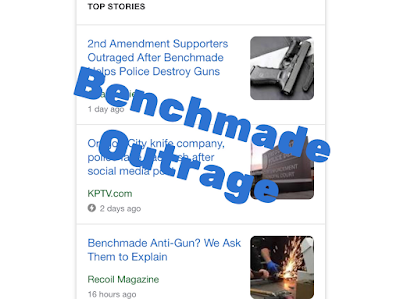 Recently the knife company Benchmade has gained a whole lot of attention from the gun community it really wasn't looking for. Right wrong or indifferent, due to a FaceBook post from the Oregon City Police Department, Benchmade is getting a ton of heat from Pro Gun people.

For me at this point, the heat is a bit over the top. People (like people these days do) are reacting emotionally with very little information, or arming themselves with just the data that is aligned with their preconceived notions, based on their initial emotional reaction to reading the very first headline on the story.

It's sad that this is the way we are. Instead of taking in all the data and coming to a logical conclusion, we choose to just fly off the handle. Sometimes our first reactions are correct. Unfortunately sometimes they are not. And when the real truth comes to light, we still refuse to accept it.

More on Why I'm Making This Style of Video


Attached is the video I made to drive traffic here.The audio is poor and so is my delivery. My arms are flying, my head is bouncing and I'm tripping over my words. That's another reason why I'm starting to make videos to go along with this blog. I am a train wreck in front of the camera. Just like most people. Also like most people I will improve the more I do it. So I'm going to improve this over time. Bare with me, or just skip the first 100 or so videos...

Something I Forgot to Say in the Video

One point I originally was going to make in the video, but forgot during the recording, is the Oregon City Police were going about things the wrong way from the very beginning.

In a damage control post to their Facebook page, they stated that Benchmade was not against firearms, but were merely helping out the Police Department by destroy firearms that were turned in by citizens who didn't want them, or were evidence in criminal cases and could not legally be returned. Fair enough. I'm sure that was per the Department's bylaws.

But there is a better solution. The Police Department should simply resell them.If some anti-gun resident turned in their Grandpa's old deer rifle because guns are scary to them, by all means, they should give them to the Police so they can sleep better at night. But why destroy the gun? The Police could have a firearms auction and Grandpa's pre-1964 Winchester Model 70 30-06 could be bought for a song by someone who would treat it right.

An anti-gunner gets rid of a scary gun, someone who would value and treat that firearm correctly gets a great deal, the Police Department makes a few extra bucks for being the middle man, and a perfectly fine rifle doesn't get hacked up by an angle grinder on loan from a knife company that now gets to spend a fortune on PR spin doctors to recover from bad publicity.

Same goes for guns used in a crime. The crime was committed by the criminal, not the gun. Let's put the gun that was once in the hands of a bad guy into the hands of a good guy. But hey, that's too simple. Instead of making money for the department, let's just hack them up.

If you agree with me or not, please feel free to comment below.

Link to YouTube video: https://youtu.be/cDD23EGuvAQ
Link to my original "I Boycott Boycotts" blog post: http://www.shanelien.com/2013/07/i-boycott-boycotts.html
Amazon link to the Benchmade knife I most likely will buy: https://amzn.to/2GZpKtr


If you're into backpacking, hiking, hammocks, bush craft and other related things, I have a YouTube channel dedicated to that. Please check it out: https://youtu.be/IzIfJNC9RCo