When I saw the above article, I once again lost a little more hope for the human race.

First off, while The Princess Bride is one of my favorite movies of all time, the guy's wearing a poor shirt for air travel. You over pack people into an aluminum tube. Half are afraid of flying, half are claustrophobic, and everybody has hijacking on the back of their mind.... and you wear a shirt that size "prepare to die" on it.

I can't fault the dude too much. I also find it inconceivable that the shirt could make someone so uncomfortable, that they make the fuss to make him remove the shirt. It is a funny shirt. In fact I almost bought a similar shirt (same one shown in the article, I prefer black tee shirts) several times. 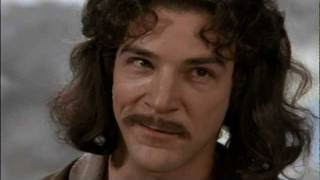 If you have never seen the movie The Princess Bride, let me explain...no, there's no time. Let me sum up. It is a cult classic with many, many fantastic one liners in it. It's a movie everybody should see at least once... but I'm getting off subject again.

I also find it hard to believe that the shirt could make someone so uncomfortable, that they make the fuss to make him remove the shirt. That, my friends, is the kicker! So you're setting on an airplane, getting ready to start a flight. Along comes this guy and sit two sets behind you. As he passes by on the aisle, you notice his shirt. The shirt says "Hello my name is Inigo Montoya. You killed my father, prepare to die" on the front. You find this scary. You think this scary man is up to no good, so you call the flight attendant.

The flight crew tells him to either change is shirt, or they'll call the brood squad. So he does and we all live happily ever after. Really? Same guy, seating in the same seat. The only thing that's changed is he doesn't have that scary shirt on.

Perhaps that shirt is an evil magic shirt that make people who wear it do bad things. You know, like what some people feel the AR-15 does. No need to worry about me. While I have a Princess Bride shirt, it's not that scary one. It's similar, but not the same scary one. While I have a Mini-14, it's not that scary AR-15. It's very similar, but not the same scary thing.

The point is this: if he was planning on doing harm, he would do harm with or without the shirt.