Another Example of How the PC Mindset Makes People Racist

I belong to a couple of internet gun forums. Besides wasting countless hours of time that could be used for productive things. My time on them has also created many online friendships and I have learned a thing or two. But most of the time, I'm left shaking my head at some of the stupidity out there.

I shouldn't be shocked. Like the saying goes "look at how stupid the average person is, then consider half of the world is dumber than that." Then when you add the Politically Correct mindset into the mix, things go downhill from there.

On one of the forums I search through every few days was a discussion of how bad the image on the site's landing page was. The image is of a few males dressed like poster boys for a tactical gear outfitter. The are all in mid laugh and one is holding a handgun. The image provides the feeling of a couple of friends or colleagues enjoying some comradery on the gun range.

A new member to the forum has decided to make a post critiquing this image. For in his opinion, if you look at the image at just the right way, it looks like the barrel of a handgun might be point at one of the models in the image.

Of course gun is clearly not. Not to mention the slide of the gun is locked back, making it unable to fire, and there is no ammunition magazine in the gun. But in an effort to promote safe gun handling, this new member is requesting the owner of the social site replace the landing screen's image.

"Safety Sally's" are common on gun forums. With good intentions, they point out every safety violation and annoyingly everything that could be misconceived as a safety violation "just in case." There biggest argument is "if an anti-gunner saw this, they'd use it against us." I believe many of them are the type of person who would advocate wearing a helmet while driving a car. Because one can never be too safe.

Then it went politically correct...... 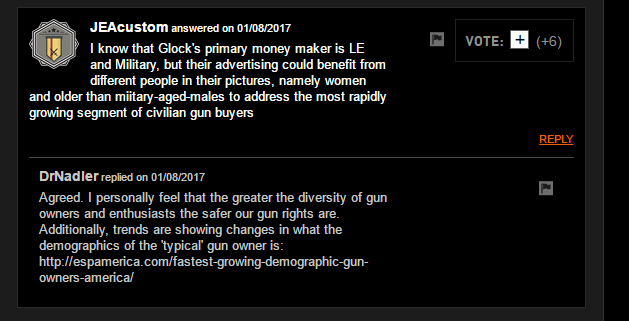 Apparently the image is not diverse enough for these two marketing experts. Until I read this, I had no idea that an image of three white physically fit males could only be a picture members of the Law Enforcement or the Military "communities." Got to through in the cozy "community" designation to give it a feel that members of a demographic all live, work, and play together in a quaint little sleepy town with white picket fences and no crime or traffic.

Also I had no idea that any given demographic will not be interested in a product or service unless they are equally represented in all forms of product advertisement and placement.

I guess the major pistol manufacturer that has a huge market share in the industry, largely based on its marketing strategies over the last 30 years need to listen to these two. The company needs to redo the picture in question and be sure to throw in the token black guy and elderly Asian lady, so they won't appear to be racist. And for safety sake, and not to give the anti-gunner's any fodder, maybe just leave their product out of the advertisement all together. It would be the PC thing to do...
Posted by Shane Lien at 1/09/2017